Leafyridge Olives, situated near Masterton in the beautiful Wairarapa region of New Zealand, is owned and managed by the Leaf-Wright family.

Its location, at the southern tip of the North Island of New Zealand, has an ideal climate for producing some of the finest Extra Virgin Olive Oil in the world. The trees grow in the stony, free draining soils so typical of the Wairarapa, alongside the Ruamahanga river. The cold, wet winters followed by long, hot and dry summer days are perfect conditions for the olives, resulting in oils with uniquely fresh flavours to gratify even the most discerning palate. 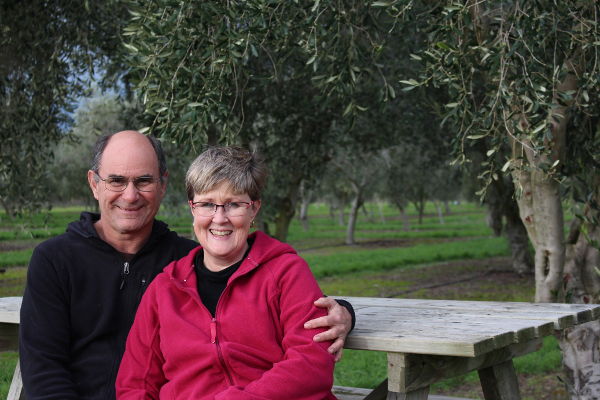 The grove was established in July 1999 . We currently have over 4,000 trees comprising varieties from Italy (Frantoio, Leccino, Pendolino), France (Picholene) and Spain (Manzanillo, Picual).

The special character of Leafyridge Extra Virgin Olive Oil is also attributed to the traditional values which we have adhered to over the years in growing, harvesting and processing the olives. Harvesting takes place in June and July each year. In May 2020, we established our own olive mill on the grove. Having our own olive pressing facility means the olives are pressed immediately after harvesting. This allows us to have complete control over the processing operation and results in the production of the highest quality extra virgin olive oil. Once pressed, the oil is left to settle in large stainless steel tanks before bottling.

The first commercial quantities of Leafyridge Extra Virgin Olive Oil were available in October 2005, for which we won a silver medal. In 2006 Leafyridge won two Gold medals at the NZ Olive Oil Awards and since then our Extra Virgin Olive Oils and flavoured olive oils have won many medals at the Annual NZ Olive Oil competition. At the 2020 Annual Awards our oils won 7 Silver medals, 2 Gold medals, 2 Best in Class medals and the Best Flavoured oil Award. A huge thank you to Bill Hey who oversaw the Pressing Operations and a fitting tribute to our first year of in-house pressing.

We get an enormous amount of pleasure and satisfaction from the effort we put into producing our oil and we are certain that you will get just as much from using it, whether in baking, cooking, on salads, or even as a health tonic, on its own!